When I was an undergraduate student over 35 years ago, the artwork of Suzanne Helmuth and Jock Reynolds caught my eye. They were a west coast Bay area artistic duo working on a project of photographic juxtapositions.[i] They cropped and placed found historical images adjacent to one another creating atypical juxtapositions. This created visual relationships between two images where none existed before. Additionally, they played with variations of scale and placement when the photos were displayed which created a conceptual edge to the installations. Their researched compositions served to raise questions about the relationships between the images in the photographs. Their installations raised questions about how the presentation of photographs (i.e. their context) affected the way in which the photographs were perceived.  You might imagine how surprised I was to bump into Jock and Suzanne in New Haven at the Yale Center for British Art opening of Things of Beauty Growing: British Studio Pottery[ii] on a mild Tuesday night this September.  It turns out that they had moved to Connecticut years ago where Jock has served as Director of the Yale University Art Gallery for the past two decades. Amazing, right? Jock knew Archana Horsting, the director of Kala Art Institute (then Kala Printmaking Institute)[iii] with whom I interned many moons ago in Oakland, California. The connections over time and space amazed me.

Since I am, among other things, a potter, I need to dwell on the pottery exhibit briefly. Things of Beauty Growing, an exhibit of exemplary, leading British studio potters, had one clear message to me: the diverse ceramic work of these particular contemporary artists was connected to historic and cultural traditions from around the globe. Juxtaposing the potters’ work made the exhibit interesting and raised questions about influences; the artists’ ideas, intentions, and use of materials; and again, the question of context. When, where and why did the artists make the pots the way in which she or he did? What messages were the artists communicating? What messages did the pottery communicate? What did the contrast between various ceramic forms tell us?

If the reader can patiently bear with me, you will see that I am leading up to a story about the Queens Library and the Southampton Arts Center. The basic strategy of juxtaposition is a powerful tool for artists, curators, and writers. Comparing and contrasting the art center and library gave me an opportunity to look at and write about their similarities and differences. The assumption is that we may look at things differently or in a new light in doing so. In terms of a spoiler alert, I find the Queens Library and the Southampton Arts Center remarkably similar despite dramatic differences between the two. How can that be? Perhaps a more interesting question might be, how did I ever come up with the idea of discussing these very different organizations in the same essay to begin with? The answer to that is simple: I have relationships with both of them.

I am a patron of the Queens Library and The New York City Public Library. For those who live outside of the five boroughs, I like to highlight the fact that the Queens Library is not part of the New York City Library system.  They are in fact distinct, separate entities.  From a practical point of view, this means that patrons need two different library cards. The Glen Oaks branch of the Queens Library, which is close to where I live, posted a notice early in the summer inviting folks to submit artwork for an exhibit entitled, “Creator’s Showcase.” It was conceived of as a non-competitive, multi-generational, and multi-cultural community event. The exhibit also served as an opportunity to highlight the creative accomplishments of teens who participated in a “Creator’s Workshop” over the summer.  It seemed simple enough, so I brought in two small oil paintings which I had made the previous year.

Anne Scotti, the senior librarian, and Marissa Richardson, who had organized the exhibit and program, seemed glad to include my paintings in the show.  The Glen Oaks branch library had been built from scratch in 2013 so it was kind of exciting to have work shown in a new building. The opening was held on a late Thursday afternoon in August. A couple of friends and colleagues who lived in the area attended the opening so my wife and I enjoyed a chance to catch up and socialize.  More importantly, many community artists and youth attended the opening with their friends and families. The environment felt safe and secure as relative strangers had an opportunity to mix and mingle. People talked about the paintings and drawings in front of them and got to know each other. There was also an open-mic room for poetry readings and spoken-word material which the teenagers had created in the library over the summer. 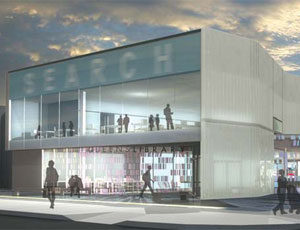 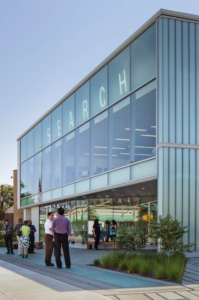 The Queens Library, as a whole, provides a treasure trove of free arts and cultural events. It offers family, children, and teen programs including fitness and wellness events. In addition to fulfilling its core mission by providing free access to the internet, books, magazines, reference materials, and other literature; the Queens Library acts as a nexus for the cultural life of the Queens community. For example, it offers programs such as Culture Connections and Sunday Concerts at Central. The Sunday Concerts series recently featured Camille Thurman and the Darrell Green Trio. These valuable programs, which typically are offered for free, are important strands in the cultural fiber of Queens.

Intrigued by this I wanted to find out more.  On their website, I learned that the Queens Library receives the majority of its budget from New York City, followed by New York State and the Federal Government. Moreover, the sixty-five Queens Library buildings spread throughout the borough are owned and maintained by the City. The Queens Library Foundation  http://foundation.queenslibrary.org offers opportunities for individuals and organizations to contribute to the life and vitality of these local libraries through charitable giving. In my opinion, it takes vision and leadership, at local branches and the top of the organization, to make things work so well. Hats off to Dennis Walcott in his role as President and CEO of the Queens Library, and to Anne and Marissa at the Glen Oaks Branch for doing their jobs so well too.

On that same day that the “Creator’s Showcase” opened, I had another event to attend and that was SummerFest. It is the annual fundraiser for the Southampton Arts Center. My wife and I patiently drove out to the east end, knowing full well we would be slammed with commuter traffic and those getting away to enjoy a long summer weekend. I have a fondness for the Southampton Arts Center and appreciate what they do. I’ve attended artists talks, exhibit openings, and performances there. I could easily be described as an audience member which I find is a nice way to get to know folks in the community. At its roots, the Southampton Arts Center is a community arts center. What does that mean? What does it look like to be a community arts center?

The Southampton Arts Center is a phoenix of sorts. The stately building complex was crafted originally in 1897 for Mr. Samuel Parrish and his personal art collection. Later, it was renovated and became known as the Parrish Art Museum in the 1950s. In 2012, the Parrish Art Museum moved to a new facility in Watermill, NY which was designed specifically for the conservation and presentation needs of contemporary and modern art.  The Southampton Village Mayor Mark Epley did not miss a beat and put together a founder’s committee to see through the development of the Southampton Arts Center now in its fifth season of programming. The goals of the organization are fairly clear. “Acting as stewards of one of the most iconic and beloved buildings in the Hamptons, our primary mission is to restore and renovate this historic landmark for future generations while serving as a hub to strengthen arts and culture for our entire community.”[i]

The Southampton Arts Center offers a generous exhibit space for visual art; houses an auditorium for talks, films, and panels; and provides a relaxing outdoor space with a stage for live musical performances. It also sports a nifty studio space for art, music, and even chess lessons. It has partnerships with International Center for Photography (ICP), Guild Hall, The Hamptons International Film Festival, and Jazz at Lincoln Center. The Southampton Arts Center is a wonderful place to enjoy a show, hear a talk, listen to a panel, meet artists, and discover something new or unusual. For example, Mountainfilm on Tour featured this month (September 2017) looks very interesting. ODD BEAUTY: The Techno-Eccentric World of Steampunk promises to be an unusual exhibit.  The current exhibit, About Face, curated by Scott Avett and David Kratz, and presented by New York Academy of Art is free and open to the public. Rhonda Ross appeared for a free evening outdoor performance with special guest David Raleigh to cap off the summer’s performance schedule. Other events are fee driven; you purchase a ticket to attend. There is nothing unusual about that in the world of arts and entertainment.

In contrast to the public library which relies primarily on taxpayer funds, The Southampton Arts Center relies heavily on fundraising and the generosity of philanthropic individuals for its annual operating budget.  The mover and shaker in this department is Simone Levinson. She serves as co-chair of the Board of Directors for the Southampton Arts Center. Summerfest is one of those events which is used to drive fundraising for the entire fiscal year. With Levinson’s leadership and vision, she helped coalesce a team of folks who gave, got, and then gave some more. That only happens when you are committed to something, have lots of energy, and are surrounded by good friends. I appreciate the amount of work and planning she and her team put into organizing Summerfest. When it was her turn to speak, Simone thanked her family first and foremost. She also thanked everyone else by saying that the success of the Southampton Arts Center and Summerfest honored those who supported it.  The idea of stone-soup comes to mind.  Summerfest created an opportunity for folks to mix and mingle, have a good time, and support a worthwhile, local community arts organization. By the end of the night, the Southampton Arts Center had raised over $450,000 through the Summerfest benefit. Leadership, teamwork and a shared vision seem to be keys to success! 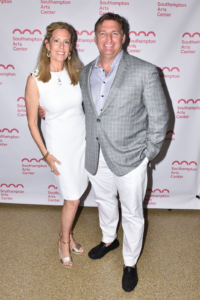 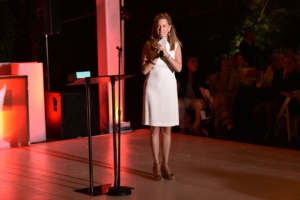 Despite their apparent differences, both the Queens Library and the Southampton Arts Center aspire to support and create a community under the cultural umbrella of art, literature, film, music, and conversation. If you ask me, both of these institutions are very much part of what makes America great: creating a safe space where different points of view and forms of expression are respected, honored, and when called for, examined critically.  If that is not enough, we can rest assured simply knowing that they are both places which you can enjoy and where you can make new friends.