The James A. Michener Museum in Bucks County, Pennsylvania

The James A. Michener Art Museum, located in Doylestown, Pennsylvania, is a scant two-hour drive from mid-town Manhattan on a morning without heavy traffic (https://www.michenerartmuseum.org/). You can shoot over to Newark, pick up Interstate 78 and mosey your way over to Route 202 to get there via the local scenic route. This route has the advantage of passing through New Hope, PA. New Hope is an artsy town, rich in local history that began as a thriving old mill town next to the Delaware River.  Alternately, for those with a need for speed, take the New Jersey Turnpike (I-95 south) to I-276 the PA Turnpike extension, which takes you to Easton Road (SR611). Easton Road will take you straight into downtown Doylestown.  My wife and I got an early start and arrived in Doylestown well before 10:00 am on a clear Saturday morning. Quite by luck, we found the Cross Keys Diner (thank you, Siri) which has a four-star rating on Trip Advisor.  Once we were fueled up on a hearty breakfast, we decided to take in Doylestown on foot. The downtown area is packed with restaurants and has its share of architectural country charm. As it so happens, we chanced upon a small farmer’s market where a friendly, blue-grass band was belting out some up-beat songs. Talk about “from farm to table.” The produce, herbs, apiary, and other products were as fresh as you could get. We were surprised at the different colors of fresh-picked beets which were spread out on some of the grower’s tables.  There was an aura of unhurried friendliness, as regulars and out-of-towners wove among the dogs and children visiting the farmer’s market as part of their Saturday morning ritual. 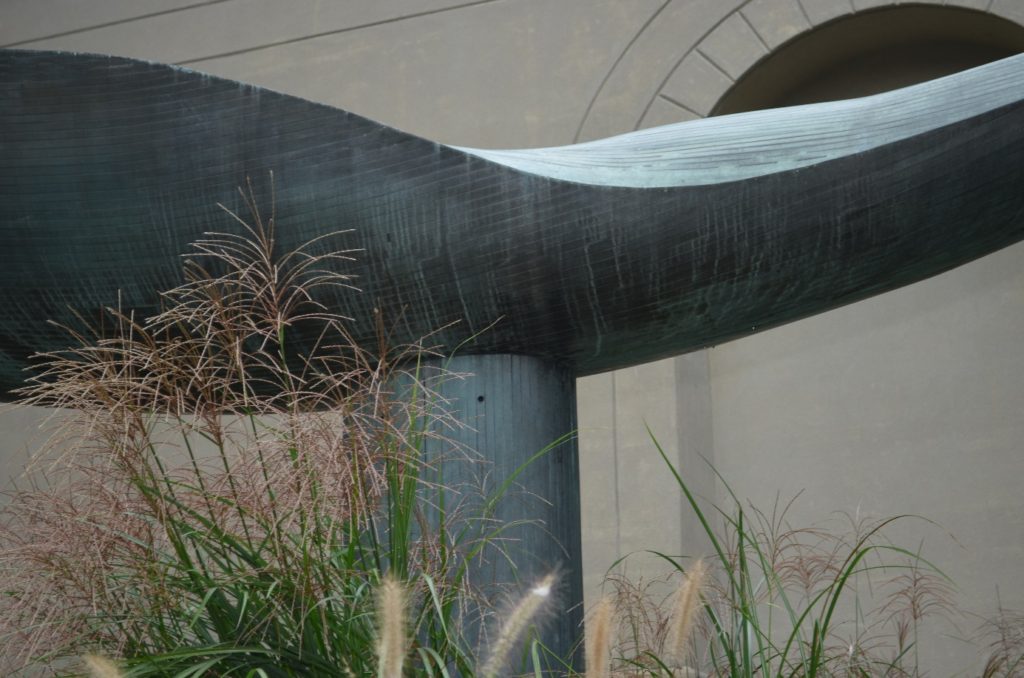 I find it interesting how museums deal with the past and the present. The James A. Michener Museum is celebrating its 30th year anniversary in 2018. This may seem relatively young for a museum, compared to the Metropolitan Museum of Art (founded 1870), or the Whitney Museum of American Art (founded in 1930). However, a respectable institution like the Rubin Museum of Art in New York City was founded in 2004, making the Michener Museum look less like a youngster in the field.  Interestingly enough, the vision of a few people is enough to create a museum. Donald and Shelly Rubin founded the Rubin Museum of Art, which specializes in arts of the Himalayas and East Asia (http://rubinmuseum.org/ ). The James A. Michener Museum received a large portion of its initial funding and visionary support from Mr. and Mrs. Michener. The Michener museum celebrates the tradition of American art, frequently taking time and space to acknowledge the role of regional artists who might not otherwise occupy a prominent place in the folds of the art history canon.  During this particular visit, I was struck by the range of paintings acquired by the museum which in some cases had been gifted or obtained through purchase funds. There was an abstract expressionist painting from the Michener’s personal art collection that caught my eye. It was obviously a Franz Kline. However, a close reading of the label indicated that it was “attributed to” Mr. Kline. That made wonder if James Michener or Mari Michener, his wife (Mari Yoriko Sabusawa), had obtained it directly from the artist before he had a chance to sign it; or whether Franz Kline had given it to an art dealer or a friend who in turn later gave it or sold it to the Micheners.  As I started down this road of speculation, thoughts of E. Annie Proulx’s “Accordion Crimes” began to percolate. What is the story of the journey of this particular painting? Or more interestingly, what is the story of the people who had been in contact with or possession of it?  Did Franz Kline ever barter using his artwork? If an artwork is labeled as “attributed to” (in contrast to “by”), should we assume that this information simply means that the painting was not signed, or is something else going on? How much would it cost to have it “authenticated” by art appraisal experts? Can unsigned works be reliably authenticated, and if so, by whom??  At the end of the day, does authorship really matter in terms of what the painting says to an audience member, especially during the moments in which the viewer is engaged at looked at and experiencing the painting?  These thoughts emerged long after I had seen the piece. A minor unresolved mystery appears to have taken root and made me wonder about the past, and now the present. 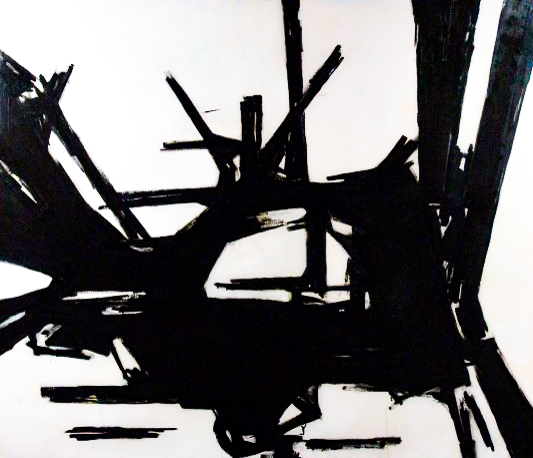 The question of past and present isn’t just about whether a museum collects historical or contemporary work. The issue of past and present is also about the intersection of the viewer (with her or his cumulative past); and the artwork (with its simultaneous present and historical states of being); and the context in which the work is seen.  That is where or how connections with art are made.

For example, I feel personally connected to James Michner. He grew up in Bucks County, which is where part of my family is originally from. In fact, Michener went to high school with my deceased grandfather (who passed away long before I was born).  While Michener was on a book tour promoting his novel “Chesapeake,” my mother asked if he would be willing to share some of his recollections from high school. Specifically, she asked him if he recalled her father. Michener took down her address and graciously sent us a brief hand-typed letter, complete with a red ink chop mark, sharing his recollections of my granddad as a high school teenager. I find it remarkable that Mr. Michener took time out to do something so very thoughtful, personal, and meaningful.

The Michener’s lives intersected the East and the West.  James Michener’s life also spanned decades before and after the New York Abstract Expressionist Art movement. Michener served in WWII while his future wife was imprisoned at a Japanese Internment Camp. Michener enjoyed a very long and successful career as a novelist producing over 40 novels including “Tales of the South Pacific” and “Hawaii.”  Through their work, lives, and legacies, the Micheners promoted ideas of tolerance, dignity, and respect. They were also very generous with their financial resources. Not only did they provide millions of dollars to establish the James A. Michener Museum, they gave a large portion of their private art collection to The Blanton Museum at The University of Texas at Austin (http://blantonmuseum.org/collection/american-contemporary-art).   They were eager collectors of Japanese woodblock prints and American art. Therefore, seeing a Franz Kline in Doylestown, PA did not seem so unusual.  Actually, it seemed very fitting; especially if you accept the idea that the New York School of American Abstract Art, which Franz Kline was a part of, was influenced by Zen ideas found in Chinese and Japanese sumi-e, black ink brush painting, (https://www.guggenheim.org/exhibition/the-third-mind-american-artists-contemplate-asia-1860-1989).

Continuing on this thread of intersections and connectedness with art, I also feel connected to the black and white calligraphic, gestural painting attributed to Franz Kline.  I am a New Yorker, I love to talk with my hands, and the use of gesture is an idea that runs through painting and pottery. To gesture means that we can express ideas physically, through movement.  This implies that we can communicate and have potential to understand one another. The work of Abstract Expressionist painters and Zen master sumi-e painters affirms and reminds us of our capacities to make a mark in the world.  The notions of gesture and mark-making are profound. It raises the question, “What types of ideas can marks convey?” With that, I encourage you to enrichen your own personal or conceptual connections with art; and to make a positive mark in the world wherever and whenever you can. 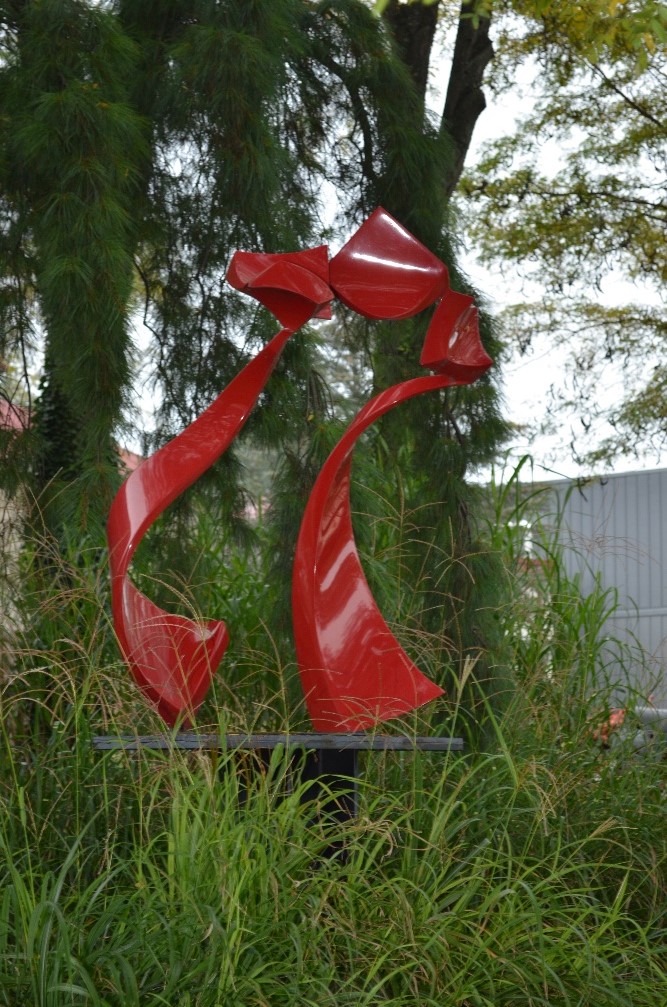