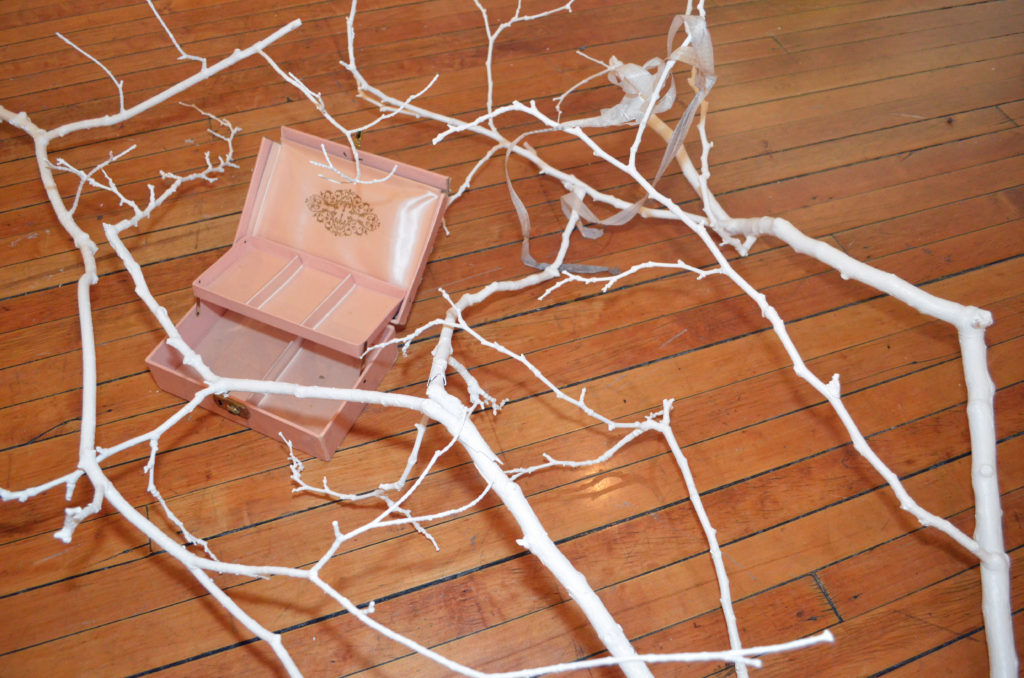 During the winter of 2013-2014, I was struck by the physical effects of the snow storms here in New York. As the cold spring wore on, I began to walk more and took notice of downed branches that littered sidewalks, yards, and woodlands. The fallen branches spoke to being torn from their source, discarded, neglected, and forgotten. I was operating in a heightened mode to pay attention for available materials which might be used with expressive intent. I collected several tree branches whose shapes intrigued me, and painstakingly coated them with multiple layers of white paint. It felt like a ritual to encase their passing. Given the random manner in which the branches were blown from the trees, I chose to arrange the transformed branches spontaneously in situ. The day prior to composing them, a neighbor discarded an old jewelry box which may have once belonged to a teenager. It was the perfect element to add a narrative dimension to the piece, conveying a sense of sudden human abandonment, loss, and displacement. The filament tape was something I found lying on the studio floor. It was used and dirty. Viewing the piece from a distance, it was hard to figure out what the tape element was actually. This made me wonder, do we treat refugees like refuse? How close are we? 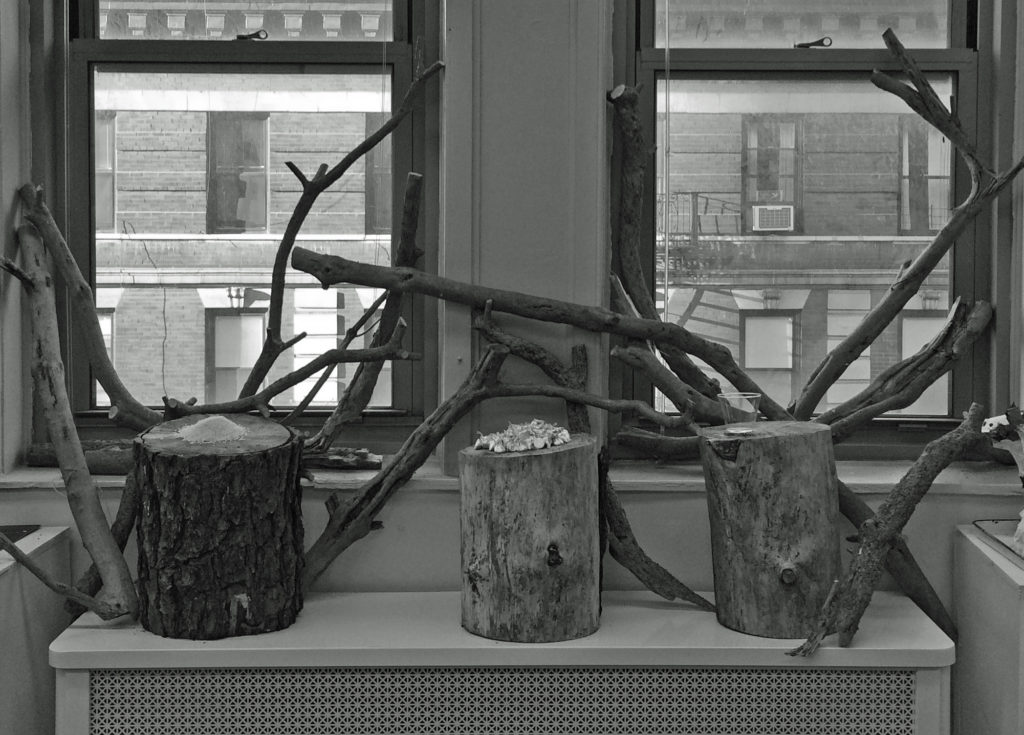 A friend of mine commented that this piece is like a kōan. A kōan, for those who are new to the term, refers to a puzzling question or story that is frequently posed by Zen masters to befuddle their students, yet aims to lead to a state of enlightenment. Calvin Hernton, a poet, once told me that disillusionment is enlightenment; and I wondered, “How far will that get you?” It depends of course on how far you plan on traveling, and how you plan to get there. Some folks travel life in a straight line, others zigzag, while most of us go in circles one way or another. Intuitive folks tend to make jumps, like me wondering right now if the Western Socratic tradition has anything in common with Eastern Zen kōans. The first uses inductive reasoning to ask if you got it right in the first place; the other leaves you stumped while your mind comes up empty. To be sure, they both involve asking significant questions, which relates to Abundance.Scarcity. Abundance.Scarcity asks questions or, more accurately, is a metaphor for questions.

Even though your experience might be different seeing Abundance.Scarcity in real life, what initial response do you have when you look at it? Are you lost, confused, or mystified? Does it make any sense at all? What messages does it send to you, when you first look at it?

The term ‘cold read’ is often used to describe your first interpretation or response to an art object, which has not been tainted by outside influences. For example, viewers often depend on the title or an explanation from the artist, critics, art writers, historians, or gallery wall text to make sense of a work of art. Based on your cold read, what do you see? What does your gut tell you about Abundance.Scarcity, without the input of others? Is it enigmatic?

After you have had an opportunity to sit with the piece for some time on your own, I would like to share my thoughts about it and tell you the story of how it came to be.

Abundance.Scarcity followed on the heels of Refuse/Refugee where I used thin, fallen tree branches and found objects to make a mixed-media sculpture about displacement. In recent artwork, I had been dealing with notions of involuntary severing or separation caused by acts of nature or people.

One day, quite coincidentally when I was out for a ride, I passed a suburban home where a tree had been chopped down. The tree crew left a series of evenly-cut tree trunk sections lined up on the curb for the taking. This caught my eye. The vertical tree trunks reminded me of pylons on a pier. The thick brown bark had broken off in patches contrasting starkly with a silvery smooth surface which glistened in the sun.

It must have been bulk garbage day when I caught sight of those tree trunks. Several neighbors had placed large bundles of twigs and branches in their front yards next to the garbage. All I could think of was deforestation in third world countries. An image of a gaunt, weathered, dark-skinned man with grey hair, hunched under a large pile of branches perched on his back, skirted in the back of my mind. I wondered, “How far must some third world potters or family members walk just to get firewood for cooking or fuel? Yet here we are in America, putting bundles of wood out for garbage.”

For me, Abundance.Scarcity is as much about the process of hunting and gathering as it is about the artistic processes of arranging, placing and transforming materials metaphorically. The work is about labor. It is about things being out of reach. The piece is about food and emptiness. The sculpture is about having; yet questioning what you do have. It is about belonging in a place or not. For example, you should have seen the looks on people’s faces as I lugged the crusty tree trunks and a large pile of branches into an old, formal, stately university building which represents intellectualism and progress. All of a sudden these large wooden tree trunks, which still had a few ants crawling on them, seemed out of place.

Aesthetically, the plastic cup may bother you. It bothers me. Why is it there? Why not leave it empty? The cup is a reference. It is a reference to living in the era of plastics and the disposable. It is a reference to gallery openings and receptions, naiveté and knowing. The empty cup is about what is on the table, not who sits at it. Perhaps that introduces too many references. However, I want viewers to look for connections between the diverse elements of the composition in order to arrive at meaningful relationship between them. The work offers an invitation for you to construct your own story of how these elements relate to each other or not. I do not intend the compositional elements to have literal, one-to-one symbolic meanings. I prefer to create a little mystery, without the work becoming completely inaccessible.

In its next iteration, I would want the piece in the middle of a gallery. I would also place the tree segments at different heights and quite simply have more of them, like a bard’s circle. Such a shift would take away the relationship to the window and urban vista, but this is not an Edward Hopper. Also, if I had the opportunity, I would bring in freshly cut tree that was about 6 feet in diameter and 40 feet long; and lay it down in cut sections. This might raise questions about what our society casts away. A bold statement on that scale might even lead to speculation about the tools, actions, and amount of energy it takes to dismantle and displace a splendid old tree; which again only serves as metaphor.

I like titles that are short in length. For example, Bruce Nauman’s Violins/Violence/Silence brightened the side of the Baltimore Museum of Art a couple of decades ago; around the time Barbara Krueger was making work like You are not yourself. Back then, I did not know that Violins/Violence/Silence was Nauman’s work or what it really meant. However, his title sunk in at some subconscious level. Imagine using violins to end violence. It is kind of like thinking we could use trees to save the world; or thinking it might actually be good to play with words, ideas, and art materials now and then. You tell me. I just find all of the contrast striking. 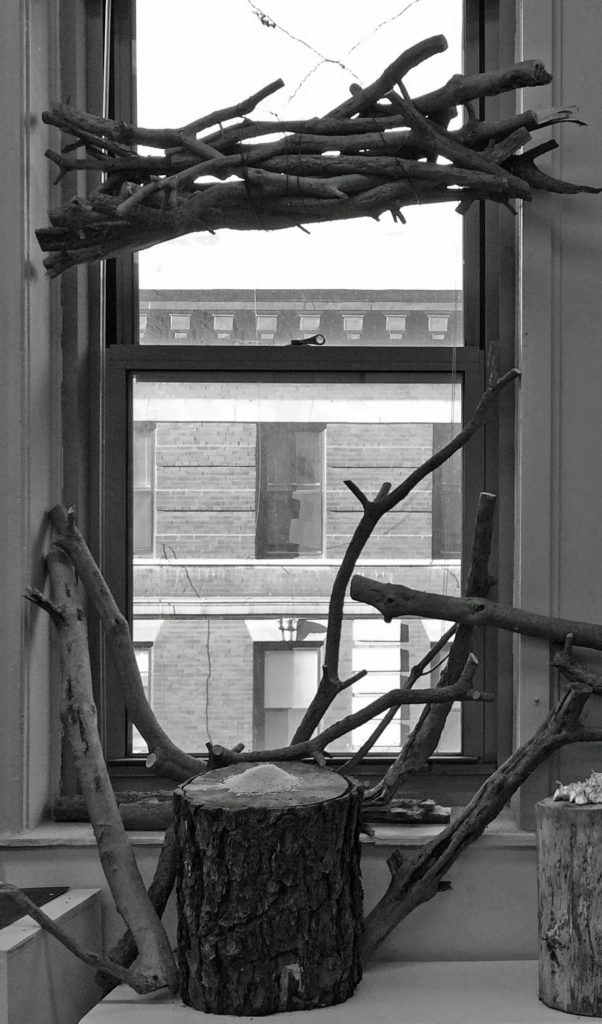