In a world where legitimate concerns over random acts of gun violence, the next emerging political scandal, or our long-term environmental sustainability run parallel with frayed nerves and stress that wears on drivers during the daily smash-hour commute on the Long Island Expressway; it is extraordinarily refreshing to find a sanctuary of peace and tranquility such as the LongHouse Reserve in Easthampton, NY. Accessible without tolls on the east end of Long Island, LongHouse Reserve is open four days a week (Wednesday through Saturday) for a few hours each afternoon (2:00-5:00 p.m.). It is definitely worth planning a visit enjoy their remarkable gardens which are tailored to envelope, enclose, and give breathing room to a variety of remarkable outdoor sculptures.  Jack Lenor Larsen, the founder and artistic director of LongHouse Reserve, understatedly muses that that it provides an alternative vision to the typical suburban back yard.[i]  A composite of carefully orchestrated horticulture interspersed with free-standing sculpture graces the sixteen acres reserve. Here the intermittent sounds of croaking bullfrogs hiding among the reeds on the edge of the main pond are accentuated by a litany of cascading bird songs.

Let’s face it, the experience one might have at the LongHouse Reserve would not be the same as watching the FIFA World Cup playoffs or the Wimbledon finals, or hanging out at your local sports bar downing a few cold ones with friends from work or school. The question we might ask is, could it have the same kind of draw? Is there something going on at LongHouse that might be interesting enough to merit a change of pace and change of venue?  Well try this on for size: new work by contemporary artists Helmut Lang (Untitled: twenty-two), Alyson Shotz (Crushed Cubes, 2018), and Dustin Yellin (Garbage Rocket & Bathroom Rocket). The vanguard meets the old guard, and of course their individual pieces are nothing alike. These new additions to the LongHouse Reserve create contrast as well as intrigue. Their artwork generates basic questions like, “What’s going on here? What is this about?” Sometimes there is no single answer; and at times, no words. However, I’m going to hit you up with two hot-off-the-press exclusive interview snippets from Alyson Shotz and Dustin Yellin; followed by a sixty-second video preview of Helmut Lang’s work. It’s not exactly the same as being here, but hopefully it will entice you to visit. 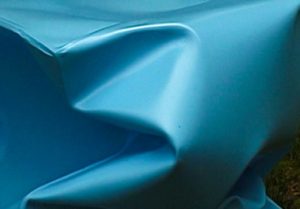 AB: Some of the folds on the cubes are quite graceful. They seemed reminiscent of folded drapes and robes found on classical marble sculpture. Did you ever experience steel cubes that broke or tore open jaggedly in the altering or the “re-manufacturing” production process?

AS: The folding that is reminiscent of classical marble sculpture is intentional and can be seen in much of my other work including Recumbent Folds and Object for Reflection. Some of the cubes have torn open depending on how the seams were welded and ground down. I’ve tried various methods through the past months. Also, I made one of these in copper that was riveted at the seams (at CAROLINA NITSCH Project Room currently), and that one really ripped apart, which I liked…. http://www.carolinanitsch.com

AB: By embracing industrial processes and materials, your work seems to involve removal of the self yet involves creation and destruction or change. What message do you want your work to communicate to viewers?

AS: Much of my practice is about trying to visualize invisible forces like gravity, space and light. My work is at its best when I am a collaborator with those forces. For many years, I’ve been exploring these fundamental forces from various vantage points through the lens of my work. I consider space and light to be two of the primary materials a sculptor can make use of in addition to the more traditional notions of mass, volume and line. Questions about what the universe is made of are what I think sculpture should be about. These cubes represent the crushing of space inside the metal via the mass x acceleration of the crusher. The pressure of the air inside vs. the air pressure outside, the alloy of the steel itself and how it reacts to this force are all represented in the final pieces.

AB:  Is there any symbolism involved in the robin egg’s blue color choice?

AS: I have never worked with painted pigments in sculpture before- this is literally the first time. I normally use color in a way that’s borrowed from the environment via lenses, mirrors or filtered out of the light itself through a dichroic structure. I decided to try something new with these pieces and break my own rules by painting them. I chose this particular color blue simply because it represents the vastness of nature to me – the sky, the ocean. 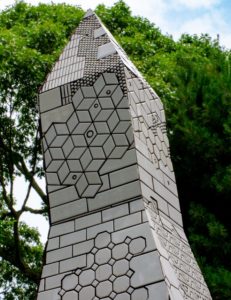 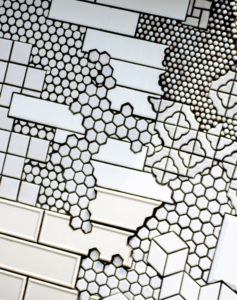 My initial response to the diverse geometric patterns on this rocket triggered thoughts about some type of multi-cultural coding language; the designs appeared fluid like jazz but linear. Then there is the edifice itself, laden with a variety of historical references. Dustin Yellin puts it all together succinctly; revealing clear, logical references coupled with his unique intentions. His ideas and experience outlined below form the basis for his material, structural, and surface design choices for Bathroom Rocket.

DY: The work is a riff on monumental forms, these powerful vertical exclamations that try to pierce the firmament. When I visited Egypt year before last, the obelisk at Luxor impressed me by its almost archetypal resonance for West. The French liked them so much, they yanked one of the pair and stood it up in the Place de la Concorde in Paris. Here in the states, in a bit of one-upmanship, the government popped one up in the heart of D.C. The Egyptian obelisks are phenomenally cut from a single stone and covered with hieroglyphic inscriptions – rather than a Tower of Babel, they present a coherent devotion to their gods and political order similar to Mills’ Washington Monument — a quintessentially patriarchal homage to power and unity, though the thrust, so to speak, is a bit more abstract. My work recasts these humorless landmarks by celebrating the notion of erosion and warped layering, as the monolith itself is not stark and singular but instead curved, mangled, unpredictable — qualities that might describe power in general and Western, especially American, monomaniacal celebration of monolithic force in particular.   The use of tile is a celebration of veneer — the Washington Monument is hollow of course, though the seven-inch marble skin implies solid stone — and the fact that it is hollow but pretends to be whole — that’s perfect irony. Work on the monument — this glorification of American unity — had to stop, bizarrely enough — because of the Civil War, and you can tell the source of the marble changed; there’s a slight difference in color. My work is quite honest about the decorative quality of its skin, and it’s quite explicit about its core structure. 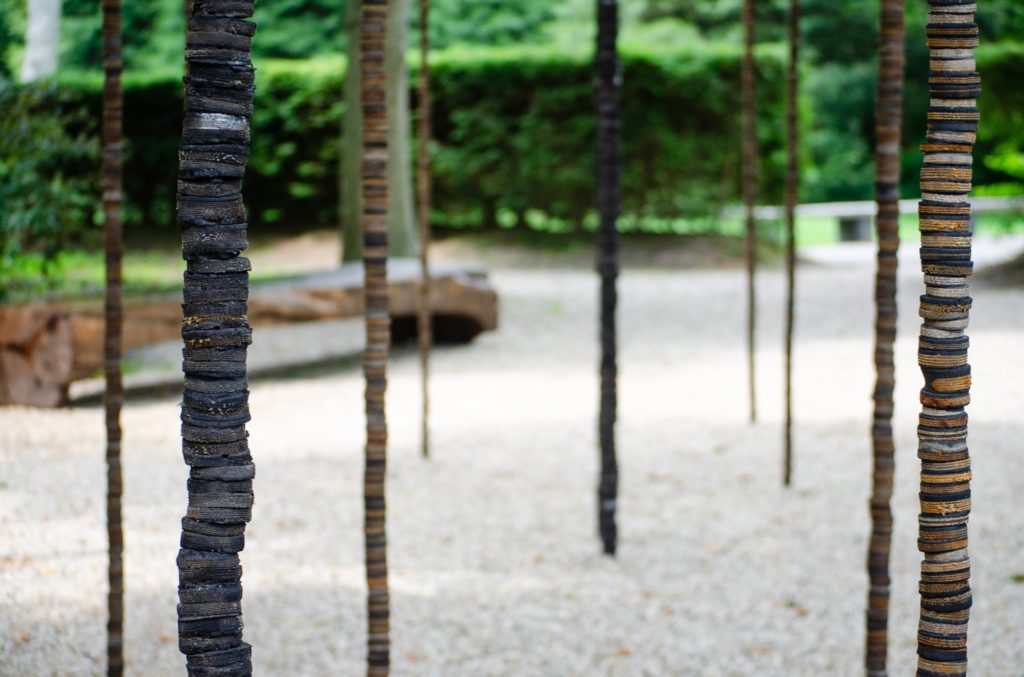 While Helmut Lang is understandably reclusive, and selective in speaking about his artwork, there is sufficient extant material from which we may construct better understandings about this piece and his approach to making art in general.  In an exclusive interview with The Independent,  Lang states, “It invites the viewer to consider the body less as a hierarchy of limbs and organs, but as a meshwork of equivalent and interchangeable elements.” [ii] For me, a totemic reference to a tribal group of vertical beings, which seem to belong together, rings true. Initially, I wondered if the piece would hold up in a natural environment, since its physical origins were literally fueled by cool street grunge paired with an edgy, modern punk-fashion. However, the piece seemed to hold its ground. In fact, I was reluctant to walk in between the individual elements or get too close. It seemed the individual structures were in the midst of a silent group conversation that I did not want to interrupt. An aura of mystery prevailed and, from all appearances, that would be a good thing too.

All art should have a certain mystery and should make demands on the spectator. Giving a sculpture or a drawing too explicit a title takes away part of that mystery so that the spectator moves on to the next object, making no effort to ponder the meaning of what he has just seen. Everyone thinks that he or she looks but they don’t really, you know. ~ Henry Moore [iii]

To me, the sculptural objects at the LongHouse Reserve are artifacts of the human imagination. The LongHouse collection reminds us that humans have the ability to imagine, to see things differently, to act, and to create. Artists embody a powerfully optimistic message of human agency that should have some carryover value, long after show-time is over. These artists have expressed their unique visions and addressed their particular interests or concerns in their own distinctive ways. They have given us the opportunity to experience and cultivate our own memories and relationship with their work in the context of LongHouse Reserve. I know that the sounds of footsteps against stone-strewn walkways, the warbling of birds, the raking of grass, and the scents of the pond and lush foliage of LongHouse Reserve are all part of that experience. In this context, my thoughts will return to these sculptures again and again, if only to understand and appreciate them better.

With a special thank you to: