Musings: a visit to the Smithsonian Institution’s
National Museum of the American Indian – New York

Most of my art and museum travelogues take place less than a day’s drive outside of New York City. However, as we enter the month of Thanksgiving, I thought, “Why not stay close to home and draw attention to the Smithsonian Institution’s National Museum of the American Indian (NMAI) right here in downtown Manhattan? After all, the story of American history would be incomplete without taking into consideration the plight and contributions of Native American’s today and in the past.”   One of the roles of the NMAI is the preservation, presentation, and interpretation of artifacts and objects that constituted the material culture of historic Native American Indians. However, I believe we need to be mindful that a Western conception of art, which I define operationally as the creation and experience of visual objects for contemplation or aesthetic enjoyment, didn’t exist for historic American Indians.  For example, consider this description of Southwestern Pueblo Pottery: “A pot and its design should be seen as existing in the landscape, rather than as representation or embodiment of some aspect of it. To the potter’s eye, the landscape begins before it reaches the pot’s surface, and it continues across the surface and beyond.”  From our vantage point in the 21st century, we can only imagination this inseparability of objects and their significance which drew from their value in daily living. To appreciate this more fully, consider how hi-tech cell phones, loaded with the most recent and useful apps, are considered almost indispensable for most people today. In general, we don’t leave home without one to communicate with family, conduct business, take pictures, or navigate our way around town. We would not have to go to an art gallery or museum to appreciate this innovative technology. Similarly, as little as a hundred years ago in the Great Plains, a bottle made of tightly interwoven plant-fibers sealed with pitch (tar) which held drinking water would have be seen as indispensable for survival. It wasn’t made to be put on display or contemplated. The object served a fundamental human need. Therein lies one of the values of National Museum of the American Indian. While its collection rests in objects and artifacts, it is really a place about people and community. The objects, relics, and even contemporary installations, while intrinsically interesting, still function to tell parts of the story of American Indians. This story is inevitably part of the story of America and beyond.

I visited the National Museum of the American Indian on a grey, windy Friday morning. I arrived early and had to wait about a half hour before the museum opened at 10:00 a.m. This turned out to be a propitious occurrence. I spent the time enjoying a brisk stroll through Battery Park which is maintained in part through the Battery conservancy. Interestingly enough, morning glories were still in bloom. There, in a local community garden, was a late crop of hearty salad greens. I felt right at home in this tranquil natural setting, no matter how strikingly it contrasted with the towering hi-rise office buildings of lower Manhattan. I imagined that the Lenape and Munsee Indians, the indigenous people of Manhattan, would have felt good about the garden and may have appreciated the few brave souls near the bulkhead who had cast their hopeful fishing lines into the swirling dark waters of the Hudson River.

Once the museum opened and I passed through security, I enjoyed seeing several of the exhibits: Infinity of Nations (Art and History from the Museum’s permanent collections); Taíno: Native Heritage and Identity in the Caribbean; Jeffrey Veregge: Of Gods and Heroes; Transformer: Native Art in Light and Sound; and Patriot Nations: Native Americans in Our Nation’s Armed Forces.  Each exhibit offered something different. I felt that there was a conscious curatorial decision to create exhibit programs that appealed to young people, those with curious or open minds, international visitors, and patriotic Americans of any race or ethnicity.  While personally, I take a stance for non-violence and creative problem-solving or conflict resolution, I found the depiction of American Indians in the Patriot Nations exhibit interesting. The Patriot Nations exhibit refutes the flattened two-dimensional image of Cowboys and Indians, the “good guys” versus “bad guys” with which I grew up. If I left wanting to see or know more, I would have enjoyed more in-depth stories of a few of the individuals who were portrayed as serving within the Armed Forces. For me, providing three-dimensional rendering of human lives in words might have afforded greater opportunities for nuanced understandings of the trials and tribulations, dilemmas, or obstacles which these individuals faced or over-came.  As members of a group people facing a history of eradication, oppression, and change, what choices did these individuals who joined the Armed Forces make in regards to resistance, acquiescence, acceptance, assimilation, transcendence, or transformation? How much of their choice to serve in the Armed Forces was influenced by their family traditions, other social contexts, or their own personal inclinations and belief systems? Suffice it to say, the exhibit got me thinking.

It is a good thing that the NMAI offered four different types of exhibits. Let’s face it, we all have preferences, or likes and dislikes, that influence what we choose to look at. Likes and dislikes may even impact on how we interact with the work. For example, I am very interested in ceramics. I was delighted to see examples of Mimbres and Pueblo pottery close-up and in-person. The design of Mimbres imagery on ceramics is fascinating. In contrast, I am not particularly drawn to multi-media gallery installations which seem to be typical of contemporary art. Therefore, I didn’t spend much time with Transformer: Native Art in Light and Sound. However, once piece appealed to me greatly and that was Jon Corbett’s Four Generations (2015) video. He created a program that used a spiral-like generative algorithm to re-create single-channel video (pixelated pictures) rendering portraits of the artist, as well as his father, son and grandmother. Corbett synthesized a Western tradition of portraiture while modifying contemporary technology and incorporating a spiral approach to image design that is based on American Indian beading. I believe, but am not 100% certain, that spiral fabrication, which involves starting in the center and working outwards is also a common process for Indian basket weaving. Kudos to Corbett for honoring the past and the present, working within the worlds of fine art and craft, and at the same time valuing what matters most: family. 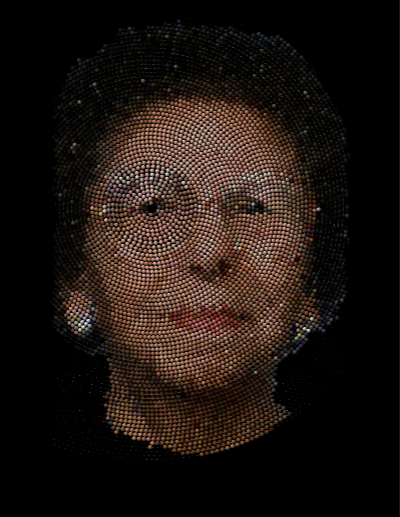 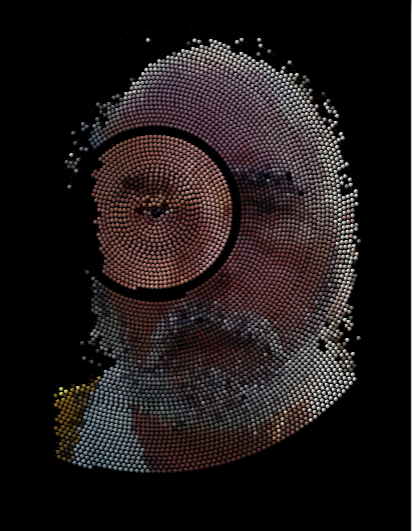 As a special note, I decided to look into Jon Corbett’s background more, because I wondered, “Where did he come from and how did he arrive at this work?” It turns out that he hails from Canada, is quite a scholar, and has followed a professional trajectory common for artists in Western higher education. He earned a BFA from the University of Alberta in 2008 and completed his MFA in 2015 at the University of British Columbia (Okanagan).  Since then, Mr. Corbett has been quite active in academic circles, publishing numerous collaborative articles and presenting at conferences as part of his larger professional practice – in addition to exhibiting as a contemporary media artist. These combined heritages of his Native American identity (Northern Hemisphere) and contemporary Western higher education make sense and provide a context out of which his artwork emerges in today’s digitized world.

Jon Corbett is not the only person interested in using digital technology to change perceptions of Native Americans. Kevin Gover (Pawnee), Director of the National Museum of the American Indian, is passionately committed to using the digital platform as a way of re-educating generations of children and adults about indigenous people of the Americas. In the museum’s Strategic Plan 2017-2021, he boldly announces that:

The National Museum of the American Indian is uniquely capable of improving and expanding what Americans learn about the indigenous peoples of the Western Hemisphere. These histories and cultures have too often been devalued and distorted, so we partner with Native Nations to tell a more complete and accurate story. It is a complex story, and one that all peoples share. History has long been taught from a narrow perspective that overlooks and diminishes the contributions of many. In our diverse country, we must learn to present history with complexity, fearlessness, and integrity. We seek to lead by example. Our objective is to change how and what Americans learn about Native American history and culture. If we do it well, we will change what Americans know, not only about American Indians but also about many diverse peoples throughout the world.

Given this agenda and platform, those who have access to the internet and the interest or opportunity can learn a great deal from the Smithsonian Institution. The NMAI created a tremendous on-line K-12 teaching and learning resource entitled Native Knowledge 3600.  Artists and designers may also access digital image files from a much broader database of the Smithsonian Online Virtual Archives (SOVA).  The digital revolution is here. It makes me wonder, “What effects will all of this information have and for whom?” I also wonder, “Do you see museums differently after reading this short essay? If so, how?”

One thought on “Liner Notes November 2018: A visit to the Smithsonian Institution’s National Museum of the American Indian”